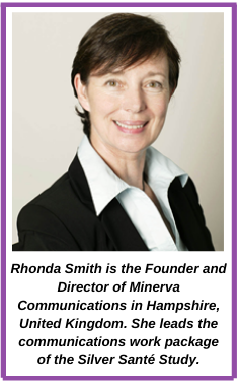 Teams working on EU-funded projects have a contractual duty to share their aims, progress and results with a range of stakeholders – from policy-makers and governmental institutions, to civil society, the commercial sector and members of the public.

After all, what’s the point of the public purse funding health research if the results aren’t shared, applied and put to good use for the benefit of all of society?

That’s why communications is embedded in the design of the Silver Santé Study project and have been delivered since its launch in 2016. Through a broad range of channels – websites, social media, public meetings, publications, newsletters, newspaper articles, and TV and radio interviews – the Study’s communications team in partnership with  all its researchers are working hard to engage with and communicate the project’s work to lay and professional audiences. We identify news from our project partners of interest to the public and targeted stakeholders and write stories for the project websites and newsletters. For example, as scientific papers are published, we do our best to make sure the findings are communicated via external channels to as broad an audience as possible, stimulate interest and encourage engagement. Gathering and creating photos and audio visual material based on the work of the project’s research teams, managing the project’s social media accounts, and liaison with journalists interested in writing about mental health and meditation fills our working days..

The aim of the Silver Santé Study is to identify the determinants of a healthy later life and to develop programmes that we can all use to safeguard our mental health, well-being and quality of life as we age. Our researchers are examining whether mental training techniques – such as meditation or learning a language – can make a difference to well-being throughout the life course. What makes the study unique is that it’s the longest ever study of both meditation and language learning and it’s the first to examine the emotional aspects of ageing and mental health – all points that make the findings of great interest, particularly with regard to informing mental health policies.

As the project is now in its final year, our communications work will soon come to a crescendo helping to cascade methodologies, data and results  to a broad range of interested and influential audiences across Europe. The overall aim is to drive utilisation of that generated knowledge in the development of new policies and practices.  Click here to watch our short project video explaining our aims, the research, and what we hope it will achieve for both individuals and for society as a whole.

Meditation – along with language-learning and health education – is one of the mental training activities being trialled in the Silver Santé Study to assess its impact on mental health and well-being in the ageing population.

Although meditation – or mindfulness – is now commonly referred to in everyday life, there are many misconceptions about what it is. One, for example, is that meditation is about clearing the mind of all thought. Another is that meditation is a religious practice. While most religions involved some kind of contemplative study, like meditation, the meditation studied in the Silver Santé Study is entirely secular and, while based on Buddhist meditation, it has been adapted especially for potential use for medical purposes.

Rather than clearing the mind of thought, meditation is about cultivating certain qualities that we already have but to a greater degree. One of the bases of meditation is to cultivate focusing, concentration, and anchoring and this means that you are given something to focus on – such as the breath, the body, a sound, or a question. Should your mind wander and start thinking about other things, you simply bring your thoughts back to what you were focusing on and you do this with a positive, friendly attitude. Each time your thoughts wander, you bring them back to what you were focusing on. So both elements are important – the technique, i.e. the focusing, and the attitude with which you do it, i.e. in a friendly way. Once you cultivate the focusing element, it helps you to become calmer.

It’s also important to remember that the aim is not to become the greatest meditator, it’s about helping us become calmer, clearer and more compassionate in daily life.

There are different types of meditation. Mindfulness, for example, is where you focus on something like the breath, the body, a sound, feeling or mental state and then you keep coming back to it in a friendly way. With that technique, it’s about being aware of the change of the breath, the change of sensation, etc. There are other types of meditation too – some focus on a question, while others, like loving kindness meditation, focus on being compassionate to oneself and to others. There are types that are reflective and others that focus on repeating phrases.

My advice to anyone wanting to try out meditation would be to find a local course to get some guidance, and then to practice it regularly to see some benefit. Some people find that meditating 10 minutes each day works for them but others meditate for longer – whatever suits you best. It’s also worth mentioning that you don’t need to be sitting down to meditate, you can do it walking, standing, sitting or lying down.

Watch Martine explain meditation in our short video below:

The adult brain can change and grow as a result of learning[1], even in later life.[2]

It is thought that learning a second language could be a very promising and dynamic way of improving cognitive capacities and maintaining the brain’s functions, as both structural and functional neurological differences have been observed in bilinguals compared to people who only speak one language (monolinguals).

These brain differences may determine how the brain ages and compensates for pathology.[3] What is more, bilingualism and multilingualism have been shown to contribute to a delay in the onset of dementia in seniors.[4]

Although remaining a subject of hot debate[5], research has shown that bilingualism seems to strengthen certain cognitive processes, constituting a ‘bilingual advantage.’ Compared to monolinguals, bilinguals have demonstrated higher scores on cognitive tests, especially those measuring attention and mental control.

Some neuroanatomical and functional changes have been associated with foreign language learning, such as the growth of certain brain regions, and a better connectivity between them. This is promising in the context of ageing, as the brain tends to lose its volume and connectivity with time.[6]

Although research in language learning has focused mainly on children and young adults, a few studies have concentrated on the effects of second language learning in seniors. Not only has it been shown to be feasible and beneficial from a subjective point of view[7], research has shown that it can strengthen cognitive functioning, as well as psychological well-being and quality of life.[8] Moreover, a recent study has evidenced increased connectivity between certain brain regions of Italian older adults learning English after only four months of training.[9] Indeed, learning a foreign language is an intense intellectual activity, which involves memory and attention.

Learning a second language can also engage communication, travel, and involvement in the community, providing seniors with an outlet to improve their overall well-being and sense of confidence. More studies are needed involving larger groups and a longitudinal design and the Silver Santé study is the first to carry out such research. With a language-learning intervention of 18 months, Silver Santé is the longest ever study of its kind and it will be fascinating to see what impact the course has on the mental health and well-being of its participants.

[8][ Pfenninger, S. E., Polz, S. (2018). Foreign language learning in the third age: A pilot feasibility study on cognitive, socio-affective and linguistic drivers and benefits in relation to previous bilingualism of the learner. Journal of the European Second Language Association, 2(1), 1–13. DOI:http://doi.org/10.22599/jesla.36

In an experiment involving identical twins, who would age faster: the twin who is placed in a high-speed rocket and travels near the speed of light or the twin who remains earthbound?

While studying this dilemma known as “the twin paradox,” Albert Einstein guessed that the date of birth is not enough to know the biological age of a person. In 1918, within the framework of his theory of relativity, Einstein showed that when returning from his trip to the stars, the galactic twin would be younger than his sibling born on the same date and with the same DNA. What was unknown 100 years ago is that we don’t need a trip on a space shuttle to modulate our cell ageing. Current research shows that less than 25% of the variations in human longevity can be attributed to our inherited genetic information. It is now clear that the quality of ageing and longevity result from powerful interactions between genes, environment, lifestyle and experiences.

Objectively we can talk about chronological age and biological age. The chronological age is calculated from our date of birth, while the biological age can be measured on our chromosomes. And they do not always match. There are repetitive DNA structures at the end of the chromosomes, called telomeres, whose function is to protect the genetic material. They fulfill a similar task to that of the ends of the shoe laces, that is, to prevent the DNA from fraying and damaging. With age, as part of a natural process, the telomeres get shorter. When the telomeres are already too short to efficiently carry out their protective functions, the cells lose their capacity for division, a phenomenon that increases the risk of most chronic age-related diseases i.e. cardiovascular disease, metabolic syndrome. Conversely, numerous studies indicate that longer telomeres predict long-term health. It has also been proven that the cells of centenarian people who are in good health have telomere lengths that correspond to younger chronological ages.

Recent research suggests that lifestyle-related factors influence the rate of biological ageing (i.e. nutrition, stress, quality of sleep, physical activity, education, social environment). In the Silver Santé Study, part of our work aims to identify lifestyle factors that may influence the rate of biological ageing. In order to do this, we collected blood samples from all the participants at the beginning of the Age-Well clinical trial and we are now obtaining a second sample from all of them at the end of mental training interventions. Our hypothesis is that brain training activities such as meditation and foreign language-learning may help to slow down the pace of the biological ageing. We very much look forward to learning and sharing the results of our study that may contribute to revealing the molecular mechanisms of long-term brain training on healthy ageing and may help in the design of preventive strategies for age-related chronic diseases.

The importance of qualitative data in the Silver Santé Study

By Stephano Poletti, Centre for Research on Neuroscience, Lyon

A first taste of mindfulness meditation

“Cosmonaut for a night”: The experiences of a Silver Santé volunteer

By Mareike Smolka, University of Maastricht

A year of learning through the eyes of instructors

Responsibility in the Silver Santé Study means caring for others

By Mareike Smolka, University of Maastricht

What is a memory clinic?

Emotions and their lasting impact on the brain 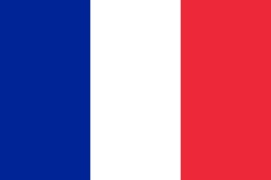